The refrigerator makes sounds that are often normal and fade with time; however, sometimes the noises get too loud, signifying technical issues with your appliance. One of the most common noises is rattling noises. Is your fridge making rattling noise?

The problem is brought about by many factors that include:

If the ice maker has a frozen water line, it makes ice in uneven chunks and vibrates as it tries to push water past the iceberg. 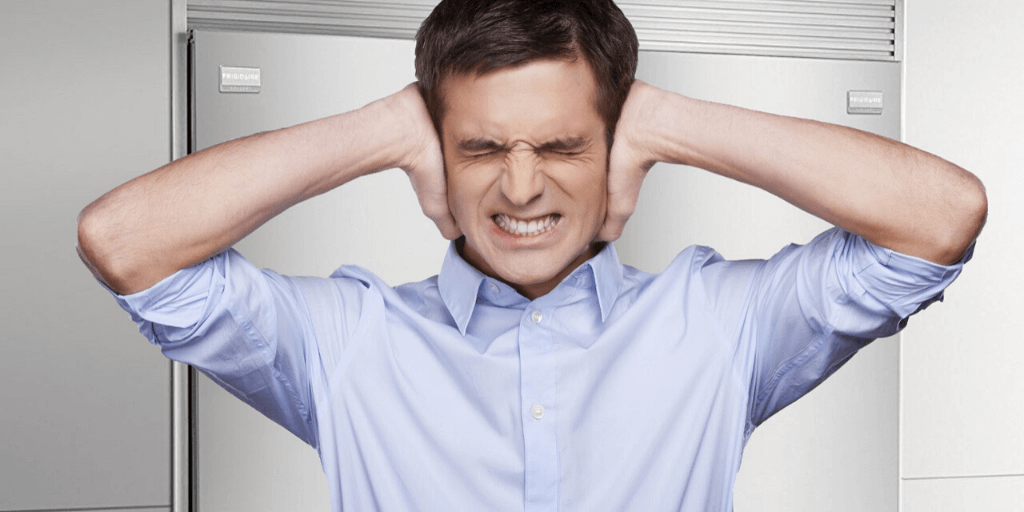 Rattling sound or even sometimes popping sounds will come about when the depressor or compressor tries to run with the refrigerant levels too low. You need to inspect the compressor and identify whether it has a crack.

If the compressor is damaged, you don’t have any way out other than to replace it. You should note that even if you have a hairline crack in the compressor, it will let in the moisture, and the refrigerant will leak, so you should replace the compressor regardless of how minor the damage is.

If there is a lot of dust or lint stuck in the blades, the fans are bound to make a rattling noise. If the noise is coming from the back of the fridge, the chances are that it’s as a result of a dirty condenser fan.

You need to check whether the fans are clean and if they aren’t, clean them. To do it, you need to access the back of the fridge and locate the condenser motor fan and get rid of any dirt and obstructions that might be present.

While at it, inspect the rubber grommets for signs of damage. You also should confirm whether the condenser fan motor is worn out. If it is, replace it.

Is the rattling sound coming from the bottom of the fridge? The defrost timer is probably faulty, and you need to replace it.

The defrost timer is a small plastic, often white. Its primary role is to let the fridge system know the length of time that heater should run to melt frost before returning to normal mode.

If the timer is faulty, you simply need to replace it. Luckily it’s inexpensive, and you can easily find it in your local store.

After years of gentle vibration by the refrigerator, the drain pan gets loose and gets out of its place. If the drain pan isn’t in its right place, it’s bound to make rattling noises.

If the rattling noises are coming from the bottom of the fridge, they are as a result of the misplaced drain pan, which is a simple problem to fix.

Check whether the pan is in the correct position, and the supports placed underneath are in good condition. To get rid of the noise, you simply need to tack the pan back in place. You also should confirm that the supports aren’t bent or damaged.

Other refrigerator noises you should be aware of

Other than rattling noises, the refrigerator makes a plethora of many other noises you should be mindful of. These noises include:

These are common in new refrigerators, and they happen as the plastic parts of the fridge contract and expand due to the rising and falling of the temperature. Crackling noises are common, and they often fade away with time, so you have nothing to worry about.

In rare cases, the crackling noises will last for a long time and get too loud. When this happens, contact a refrigerator repair professional as soon as possible.

You will also have the sounds when the compressor is running. They sound like a quiet engine or motor. They will start up, run at low or high speed, and make clicking sounds. There also might be some sputters as the fan slows to a stop.

Just like with cracking noises, consult an expert if the buzzing sounds are too loud.

Beeping sounds are incredibly normal. If you are experiencing them, you haven’t closed the doors of your refrigerator. To stop them, you simply need to close the door.

The units might also beep if the refrigerator is too high. This often happens when there is a power outage. To fix the problem, you need to correct the cooling problem.

If you aren’t used to them, dripping sounds might be worrying, but they are completely normal. The sounds result when the condenser stops, and the refrigerant flows backward in the coils.

The sound can also come about as the water drips from the coils into the overflow pan at the bottom of the refrigerator. This happens when the defrost function is working.

While dripping sounds are normal, if the sounds are coming from the inside of the fridge, the sounds won’t be normal. In most cases, they are a sign of a leak in the defrost system, water dispenser, or icemaker.

Most of the modern refrigerators have a complex system of electronic controls that switch power between fans in separate compartments, open the water valve for the icemaker, and turn the defrost system on and off.

The buzzing sounds resulting from this system are momentary, and as long as they stay this way, you have nothing to worry about. However, if the sounds are repetitive or loud, you have a reason to worry.

Sometimes the sounds result from a broken fan blade. You can easily fix this problem by replacing the blade. Buzzing sounds coming from the electronic components are best left to an expert who is highly experienced in testing and fixing the faulty parts.

Are the sounds coming from the outlet into which the refrigerator is plugged? Contact an electrician to fix them.

Whistling sounds come from the refrigerator’s circulation fans. The sounds are rare, but normal. To fix them, you simply need to reposition the fridge. If the sounds don’t impede, contact an expert to help you with the repairs.

As the refrigerant moves through the cooling system, it changes from liquid to gas and back again. This makes the bubbling sounds that, as you might guess, are normal. While this is the case, if the noises are too loud, contact a professional to help you find their source and fix them.

Banging sounds are common as the ice falls from the ice maker into the bucket. The sounds are normal, but if the noises are too loud and consistent, let an expert look into them.

Squeaking from the door hinges

If the doors were removed, then put back on, confirm they were reinstalled properly. You can do the work yourself or hire an expert to help you out.

Sometimes the sounds will come about if the fridge isn’t properly placed. You need to look under the front of the refrigerator, and the leveling legs should be in full contact with the floor. The wheels shouldn’t be touching the floor at all.

Tips on how to take care of the refrigerator

For you to prevent the sounds and any other problems from coming about, you should take good care of your refrigerator. Some of the things you should do include:

Inspect the refrigerator regularly: Many homeowners hire a repair contractor when their refrigerators develop a problem. Don’t do this. At least once a year, even if your appliance doesn’t have a problem, contact a repair professional to go around the unit and find out if it has any issues. If present, the contractor should fix them immediately.

Don’t overload the appliance: In the bid of saving energy and time, some homeowners overload the refrigerator, which is wrong. In addition to the fridge developing problems when you stock too many food items in it, it also doesn’t cool the items as well as they should.

Above are some of the measures you should take if your fridge is making rattling noises or any other noises. You should note that while repairing the refrigerator is the first step you should consider when the unit is making noises, avoid keeping on repairing it if it’s old.

Is your fridge more than ten years old? Simply replace it, instead of struggling to repair it.

How Do I Stop My Dishwasher From Buzzing?
What Makes A Dishwasher Quieter?
Solved: Whirlpool Dishwasher Making Loud Humming Noise