You will have the noises in old appliances after the appliances have worn out.

In addition to the noises being a nuisance, they can sometimes lead to more significant problems. 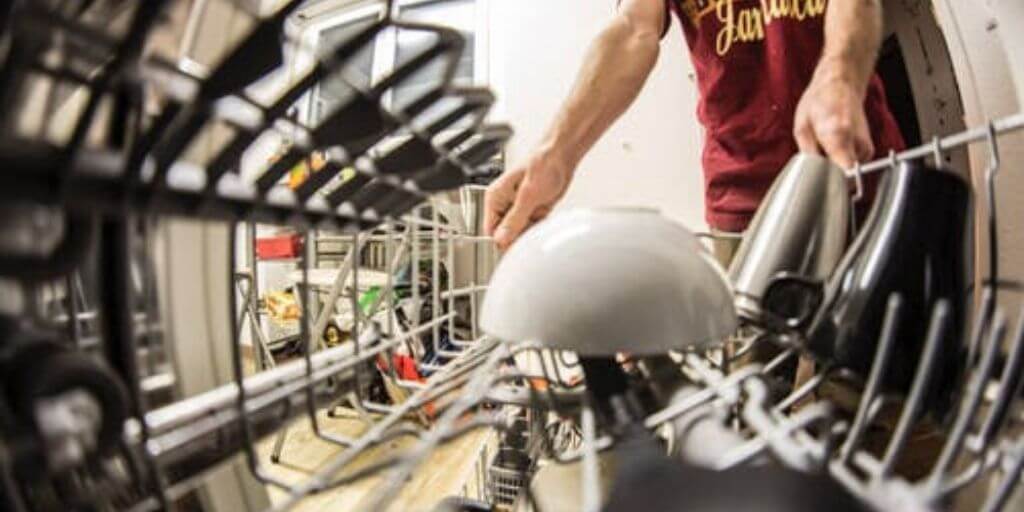 For example, when the pump stops grinding and stops, it doesn’t pump the water out from the washer resulting in overflowing. If you aren’t at home, the water might flow into your house.

How do you solve the problem?

You can contact an appliance repair professional or fix the appliance by yourself. If you opt to fix the problem yourself, you need to take the dishwasher apart and find the object causing the grinding noise.

Whether you have a Whirlpool, Bosch, GE, Kenmore, LG, Maytag, Frigidaire, or KitchenAid dishwasher, the procedure of taking it apart is the same as the parts are assembled the same way.

Several factors bring about the noises:

The most common one is when you have a piece of hard food or any other material that has broken off and settled at the appliance’s bottom.

You will also have the problem when a foreign object lodges itself inside the gears or in the dishwasher pump.

Are you used to using a lot of detergents, and you don’t clean the dishwasher? The detergent can cake over the strainer inside the pump.

If you have gone for a long time without cleaning the drain, there could be broken glass or plastic pieces inside that grind when the water is flowing down the drain.

Again, if you haven’t given your appliance any attention lately, there could be debris inside the chopper hence the loud noises.

In some cases, the pump might be wearing out. Metal shavings from the worn-out pipe might be rubbing against the other appliance components hence the noise.

For you to find out the problematic parts, you need to disassemble the dishwasher. Here are the steps to follow:

You don’t want to be electrocuted, do you? You should start with unplugging the power cord from the outlet then remove the top and bottom racks. The purpose of doing this is to make it easy for you to access the dishwasher’s bottom. The spray arm assembly is located at the bottom of the washer. To remove it, you need to unscrew the screw that holds it in place.

Sometimes the screw is a reverse thread, so you may need to turn it clockwise instead of counterclockwise.

After removing it, take a look at the bottom of the appliance and see whether there could be anything causing the noise. If there is nothing, continue removing the parts underneath. The dishwasher screen is just under the lower spray arm. To remove it, you need screwdrivers and remove Torx screws holding it in place. After removing it, confirm if there are any visible debris that could be causing the noise.

The pump house cap is a piece of plastic that covers all the things inside the dishwasher. The cap covers items such as the food disposer blade that hold large chunks of food and debris.

The pup housing usually has two screws that you should remove. After removing them, check whether there is any debris that might be the cause of the noise.

If there is debris such as food and pieces of cups or plates, remove them and put together the dishwasher.

If you don’t find anything, continue removing more items. 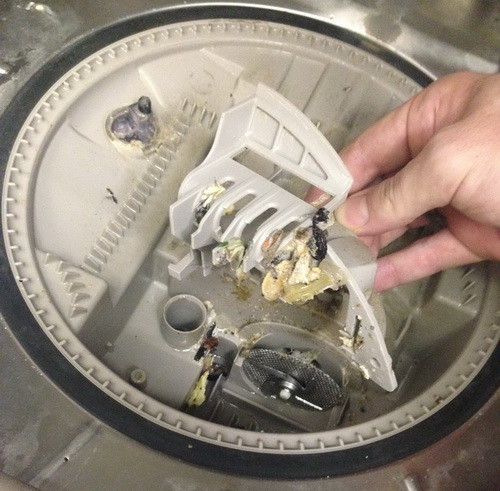 The upper impeller is located at the bottom of the dishwasher and is often held in place by a screw or bolt. When you remove it, you have easy access to the food grinder plate.

If you find broken pieces of cups, plates, food, screws, washers, or toothpicks, this might cause grinding noises. You should remove all the objects and put the dishwasher back together.

You will have these sounds when you have items hanging below the racks. The sounds come from the things hitting the rotating spray arms.

Check whether any dishes are hanging below the racks. You can quickly fix this problem by loading the dishwasher properly.

Fixing the problem means relocating the items. To prevent the problem from coming about in the future, always ensure you load the dishwasher properly.

If there are no hanging dishes that contact the spray arms, check the drain lines.  Reposition the drain line, so it doesn’t come into contact with the surfaces.

Beeping sounds while the door is open

If you can hear beeping sounds when you open the dishwasher door while the cycle is still running, it means you haven’t closed the door, and the cycle is paused.

To stop the sound, you should close and latch the door, and the noises will go away and cycle resume. If the door doesn’t latch properly, think about replacing the latch.

These sounds will come about due to obstructed or dirty wash pumps or wash pipes. To fix the problem, inspect both the pipes and pumps and ensure they are clean from debris.

If there are no obstructions, replacing them will get rid of the noises.

The most common culprit for the high pitched dishwasher noise is the water pump motor. The water pump motor will make squealing sounds when its bearings have gone bad. To fix the problem, you need to replace the wash pump entirely.

Scraping results from damaged impeller or impeller fin scraping against the pump house. Depending on the dishwasher brand, you will be able to replace the impeller itself instead of the entire motor.

How Do I Stop My Dishwasher From Buzzing?
What Makes A Dishwasher Quieter?
Solved: Whirlpool Dishwasher Making Loud Humming Noise